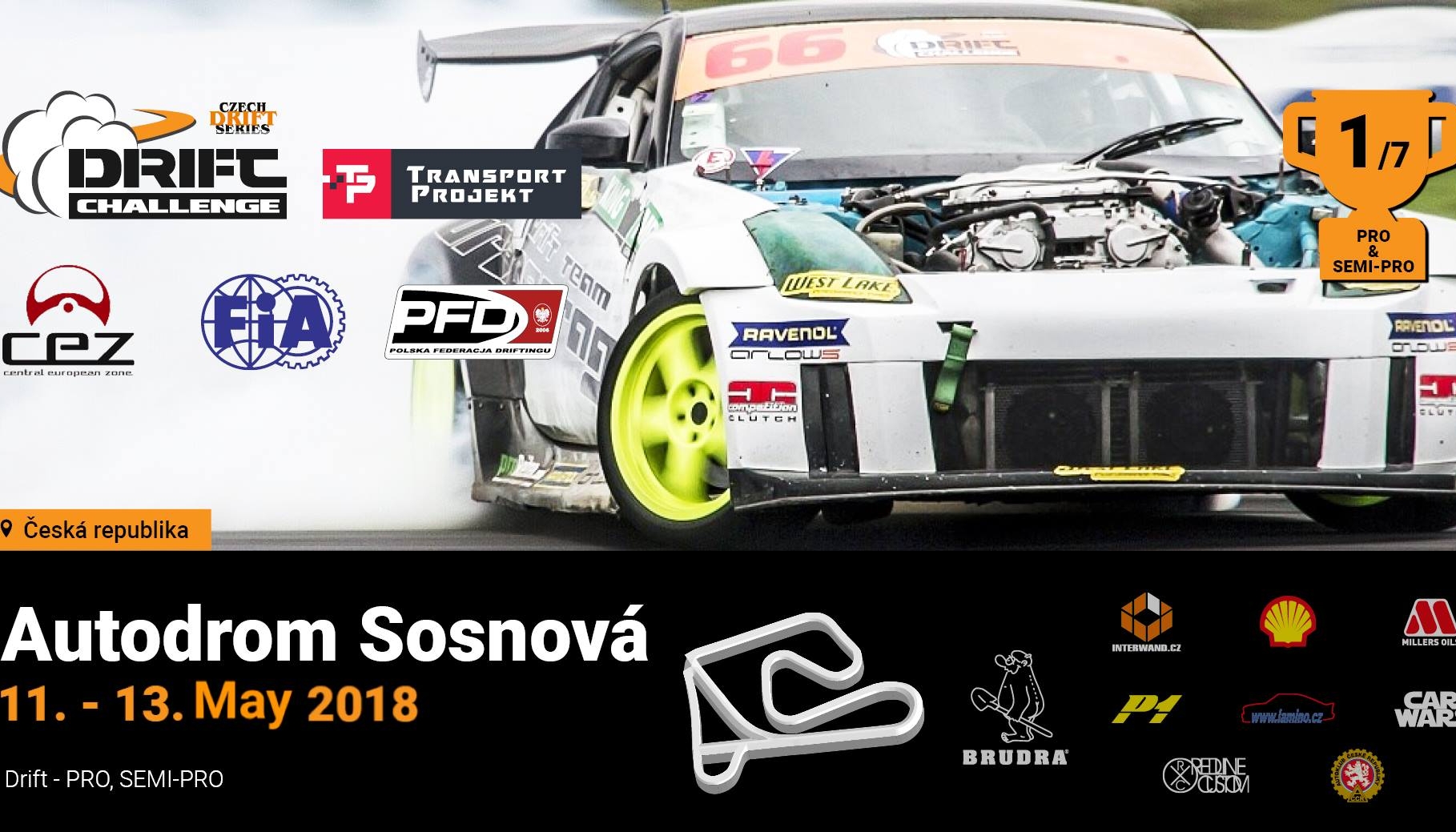 It's here, the 2018 season is starting this weekend. The calendar timer has already reached the first "full" race, which opens this year's drift challange in the PRO and SEMI-PRO classes. If we look at the starting list, it is not different than to look forward to. Such competition, which the Czech Championship + CEZ offers can not be seen, and for the victory, or the winner, can really think of all the participants! So let's go straight to the "start-up".

The domestic riders are favorite Marco Zqkouřl as well as his rivals have already "warmed up" in previous races. But we know from the past that his way to the winners in Sosn is not so easy. Let us recall the previous years when Marco managed to damage two team racing specials during one race or a situation when it was necessary to quickly withdraw a reserve engine from the team base in Liberec. But Marco is a strong rider and a strong team is behind him. It's also more than clear that they will want to pull out from home fans. We would see it behind the E39 coupe, but in the team background we may also have a showcase of new racing gear.

The starting list also includes the names of Brothers Bezouškovi. This year, the guys did not make any surprise in the form of a new machine, but we can see that they really did. Hopefully this is a sign of their stable participation in the entire championship. Standa and Láďa have enough experience to try to capture some of the highest ladders.

Where are the days when Michaela Sacherová results with the new Soarer woke up at the least embarrassment. In the course of several seasons, thanks to the quality of the family team, Michaela has become an experienced and respected competitor even beyond the borders of Bohemia! According to the first results of this season, it is clear that Michael is getting in great shape and as one of the favorites. She has to count on it. If one of her opponents sucks, she will definitely pay for it. David Levička is ready to start with a new technique. Under the bonnet, instead of the atmospheric forklift M5, the new LS unit is under the hood. Theoretically, this should not be such a change, but it is more than clear that the Sosnova has to take as the first experience of the reworked car. Possible points will be a bonus rather than a goal. Jirka Kokeš may also hit the overall results. The main question is his unstable performance and occasional absence in previous seasons. Jirka can therefore be the "black horse of the race". He can not prove to the driver, perhaps he will keep his technique and we will see him at least in TOP 8. At the start, there will also be a missing pair from Chotětov. Daniel and Michal will certainly fight for the semifinals. But they can not betray their machines. In memory, we still have engine disassembled in the service center on the table next to the racing car, it's never a nice look. In addition, Michal had problems with the new sequential gearbox at the last minute. He will have to keep fitting with a classic hook and a non-synchronous "sling". I'm not afraid it would limit him in any way in his goal of climbing to the highest level.

A great surprise can be Michal Vychodil. He has shown incredible and breathtaking rides in recent seasons. Just like him and the fans, it was clear that if he wants to move further, the E36 with the classic V8 is already well behind the edge. The lack of performance compensated by Michal's enormous engagement will not be enough for this season. Michal then teamed with the Nissan Skyline. Unfortunately, this car from the land of the rising sun brings Michael more worry than joy. The trainee has basically nothing at all. She once disappointed the electronics, then the gearbox again. Now, at the last minute before the race, Michal put a new, stronger, speedier cabinet. The real test will be Friday practice free practice. The disadvantage for Michael is that he has to completely learn all the habits of the atmosphere. The turbomotor is a completely different song and even when using ALS or lower filling pressure to suppress tubro-hole, it starts basically from scratch. If the technique were to last and Michal was moving in the TOP 8 it would be a beautiful end of this powerful story. Or is it the beginning? David Mourek, of course, is also included. David is a very accurate and quality rider. Sosnová also succeeds, if he does not betray the technique, he could go with his ragged style at least for the participation in the TOP 8. His racing machine got a complete repas over the winter, and the gearbox, which occasionally bit a bit of nerves to David, was replaced by a new one.

Czech riders will not have that easy. Even strong foreign competitors have entered the race. We can look forward to excellent Mark Wartałowicz. Where this Poland appeared, he was on the podium. Krystian Morawietz must also be counted. His Fiat Strada still pays for great exotics in the starting field. In the Czech Championship, Cezary has already shown nice results. Unfortunately, we will not see a new technique by Michal Rzoska. Hopefully, Michal and the new machine will be introduced to Czech fans at least in Hradec. Nor is there any sharpener in the Slovakian expedition. Gabo (Gabriel Koczkáš) will come to Sosnová to make a repairs after last year's outage. In great form is János Onódi. We can also look forward to a newcomer in the class for Luboš Ďurin. The new addition is not only a top-of-the-line shift, but also a new GTE VVT unit - a single turbo under the hood. Germany represents only one name so far, Alex Dorn. He did not manage to do the last, but he had technical problems besides the crash. Hopefully he will avoid this year and Alex will be able to use the potential offered by the Nissan 350Z with eight hundred horses and a torque of 1000 Nm. We have something to look forward to and I hope that our favorite autodrome at Česká Lípa will meet us as much as possible to help Czech riders fight foreign rivals. They will need it. Even if we offer live live broadcasting again, this is a completely different level. So get out of the chairs and watch the weekend arrive at the mall.